Steampunk Tuesday - Why I Love Steampunk

Why I, Adrienne Kress, love Steampunk: 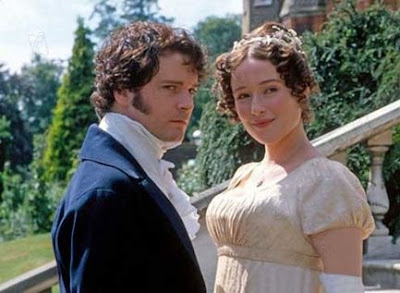 I am, as the title of my blog would suggest, an actress.  Why did I become an actress?  To play make believe.  And what do I want to pretend to be?  Oldy-timey people.

Okay.  I love any kind of acting really, anything from contemporary realism to fantastical musicals, but I absolutely adore period pieces.  I love the costumes, I love the different way people expressed themselves.  I love the plays that have lasted the test of time.  I love dueling, and historic dancing, and carriages and yes, I even love corsets.  Because I don't have to wear one every day.

Now there's nothing saying Steampunk needs to be set in Victorian/Edwardian England.  There's a very popular Wild West Steampunk subculture, and more and more people are exploring other parts of the world as well.  All good things.  But, hello, my name is Adrienne Kress and I am an anglophile.

I have loved England (or my romanticised version of England) since before I can remember.  It was the setting for all those oldy-timey BBC movies/TV shows I watched growing up.  Where my favourite Disney musicals took place.  The land of Shakespeare (which I fell in love with at the age of 9).  Thatched cottages.  Grand estates.  And then there was London.  Magical, grimy, historical, fabulous London.


I made it my goal in life to get me to England, as soon as I possibly could.

Through the University of Toronto, I was able - in my first year - to study at what we dubbed "The Castle".  Herstmonceux Castle in East Sussex to be precise.  I was horribly homesick, but I stuck it out.  Why?  It was ENGLAND.  I was living in the English countryside. I went for field trips into London and visited the Tate, British Museum, National Gallery, St. Paul's and on and on and on.


Then after I graduated from university in Toronto, I returned to the UK to live in London proper.  I had been accepted into LAMDA's post-graduate one year Classical Acting program, and after about two days I had determined that I had to stay longer.  So after my fantastic year at LAMDA drew to a close, I acquired what is called in the Commonwealth a Working Holiday Visa.  It's a visa for people under 30 that allows them to live and work in a fellow Commonwealth country.

I spent three incredible years in London, leaving only because my visa expired.  I learned that London (and England itself) was far from a perfect utopia.  It has political difficulties and a class structure held over from the past that still permeates contemporary interactions.  Tube lines are shut down often for construction, and the downtown streets are packed so tightly with locals and tourists.

But despite learning that my dreamland had flaws, I still loved it.  I loved that most of the museums were free, and if I was feeling low or bored or whatever, I'd just pop in and be inspired.  I loved the parks, would wander through them as often as possible.  I found my cozy pubs (not so easy, as many London pubs are very serviceable, not nearly as quaint as one would think), The Dove on The Thames was right near me and also had so much charm.  Speaking of which . . . the part of the river I lived near was lovely.  Parks lined it, leading to rows of pubs and rowing clubs, and then the more posh fabulous homes in Chiswick.  Most of all, I loved the theatre.  I went to the theatre there the way I see movies in North America.  It was affordable, and it was almost consistently quality.


And after many years of being back in Toronto, I still get pangs in my gut, missing London so much.

3.  I love leather and brass and clockwork pieces, oh my!

The combination of those elements makes anything look cool.  I also love goggles, and corsets, and weird crazy weapons. 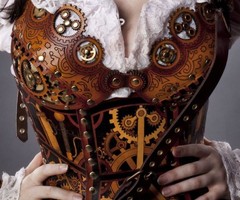 4.  I love the Swiss Family Robinson treehouse, the Mouse Trap board game, and the machine that made Violet Beauregarde's gum in the Chocolate Factory.

Seeing how things work, how one thing affects the other.  Watching wheels turn, and balls roll, and pulleys pull.  It's just so cool.  And really fun. 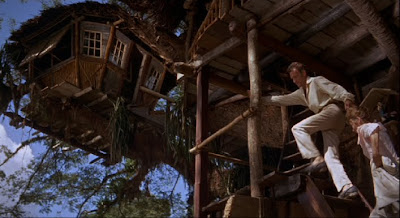 Why?  Well aside from the cool toys factor, there's the brilliant opportunity to deal with certain subjects that might otherwise come across as a bit preachy or too on the nose or just too darn risky thanks to the nice distancing layer of the fantastic.  First interracial kiss on television?  STAR TREK.  And has any contemporary television show dealt with the tension between religion and science better than DEEP SPACE NINE or BATTLESTAR GALACTICA?   Well okay, maybe THE WEST WING comes close. . . 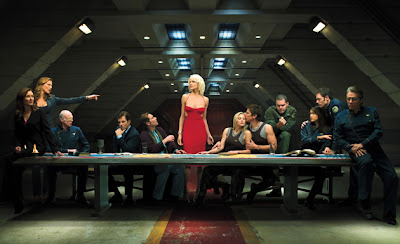 He is my writing inspiration.  His work showed me one could do weird and fabulous things, could break the writing rules.  That one could have fun.

No, he didn't write Steampunk.  But what he wrote was wonderfully absurd.  And I love absurdity.

The concept of Steampunk is an absurd one.  You need to have an ability to suspend your disbelief, and, I really think, a sense of humour.   You need to be able not only to accept the dichotomy of a world in the past using technology of the future, you need to be excited by it.  You need to, when you see the trailer for THE WILD WILD WEST with Will Smith for the first time sit up a little straighter in your chair and think, "You can DO that??"  You need to think that it's wonderfully marvelous, and utterly ridiculous, and the fact that it is utterly ridiculous makes it even more wonderfully marvelous.

I love a good idea.  And Steampunk is just a really good idea.  It's fun.  It's wacky.  It's absurd.


So there you go.  My list.  It's hardly comprehensive, there are many smaller things I love about it.  But these are the major factors that brought me down the road to THE FRIDAY SOCIETY.

Now it's your turn!  What do you love about Steampunk??

For myself, I have been finding my own love of steampunk residing in the endless possibilities within the genre. Just today, I released Aladdin and His Wonderfully Infernal Device which practically lent itself to a steampunk treatment. The challenge for me as an author was to re-tell Aladdin in a steampunk manner, but not simply "glue some gears on it and call it steampunk."

I had a blast writing it, and that's another reason I love steampunk: it's fun! In this genre we take Victorian convention and turn it on its ear through creativity of style, gadgets, or attitude. And as you mention in your blogpost, steampunk originates from England but covers even the farthest reaches of the Empire. I've read stories set in Africa, South America, and New Zealand; and the writers are having a smashing good time. As a reader, so am I.

And this is why I <3 steampunk.

I love the visual richness of steampunk. Nowadays the workings of our devices are hidden behind flat panels and white painted metal. I want to see a machine actually working, the gears turning, hear the noises.
I kinda fell into steampunk, I design and make jewellery, and the pieces I made were "steampunk" before I even knew steampunk existed. Lots of mechanical bits and pieces, dragonflies with propellers for tails etc....... So visually satisfying.

I love the fantastic industrial grittiness of steampunk. It's just so appealing to look at and explore. I also really love the time periods most commonly used -- Victoria, Edwardian, Wild West. Those periods in history were SO ripe with cultural and social changes that are awesome to explore as themes couched in the romping fun of steampunk storylines.