Steampunk Tuesday - A most successful gala!!

Last Friday was the book launch for THE FRIDAY SOCIETY.

Or rather THE FRIDAY SOCIETY gala!!

It was held at The Gladstone Hotel here in Toronto, and organised by yours truly - and IT WAS SO TOTALLY AWESOME.

We had displays of steampunk props and inventions by Messrs Smith and Bodine.  We had a demonstration of Bartitsu (with EW Barton Wright himself explaining the technique).  We premiered the trailer.  And of course I read.

People came in costume.  People posed in the photo area with awesome props.  People ate cake.  Oh yes.  I let them eat cake.  Not just one cake but FOUR CAKES.


How did it all come to be?  Well first of all I had insane amazing help from Chris Reed at Small Print Toronto and Adam Smith with Steampunk Canada.  And of course the amazing support from the staff at The Gladstone.

Second of all I had awesome help from my parents.  They drove me to the hotel at 4:30pm that afternoon, and my mom and I (along with some very helpful folks from The Gladstone) helped set up the room in a way that I thought worked best (yes we moved couches across the room, and then back again when I changed my mind).

Then the hotel technician came by to see what I wanted tech wise and he was just fantastic: highlighting certain areas of the room with light, and making sure the reading/trailer screening/fight demo ran smoothly.

Adam (along with adi, a fellow Adrienne and one of the organisers of the Ad Astra convention) showed up at 5pm, and set up a table where he could show off his amazing Steampunk props.  They also helped me set up the stage area which was where the photo area was.  I always get annoyed that stages take up so much space and are underused at events like this.  They are used for the reading and then there's this big empty space.  So I decided to set up one end to be a photo area.  The room has amazing exposed brick walls and lovely deep red curtains over the windows so it worked really well.  Prop a Penny Farthing (one of those oldy-timey bikes with the one giant wheel and one little one) against the wall and you're good to go! Adam helped set up a table of Steampunk props that people could pose with.  And let me tell you, it went over gangbusters.  People loved it.  And the stage was well used over the course of the evening. :)

Then Mr. Bodine (his character name) showed, and set up another table with his fantastic Steampunk devices.

The fight team who were doing the demonstration came a little early to run through the fight on the stage.  And then helped put up some twinkle lights.  Because twinkle lights make everything awesome.


And of course Chris Szego and her team from Bakka Phoenix Books were there by then to set up the books (they also very kindly helped sell some of my friend Katie's jewelry - I've shown you some of her work before).

And then people arrived and everything went beautifully (I was seriously stunned by this, usually something goes wrong. . . but no!  So crazy!).  People took pictures on the stage, they loved the trailer and the Bartitsu demonstration (and were rather fond of the reading if I do say so myself :) ).  And OMG, the costumes!  People really outdid themselves.

It was an amazing evening, full of fun - and it wouldn't have been what it was without all the amazing people who came.  I was so overwhelmed by the support, and I say it all the time, but it's well worth repeating . . . I know the most talented, most generous, and most awesome people on the planet.  Yes.  I am just that lucky.  So thank you, again, all of you.  It meant the world to me to share this evening with you all.

But enough words, the best way to share the evening is through pictures.  Bear with me.  There are a lot of them :) . 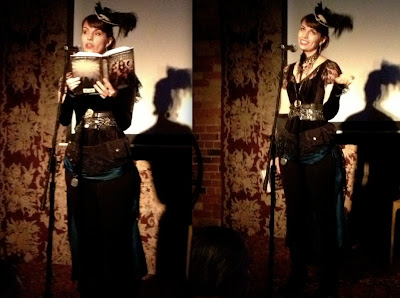 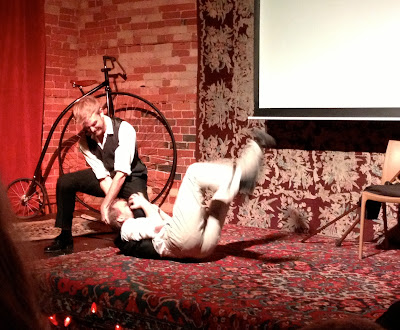 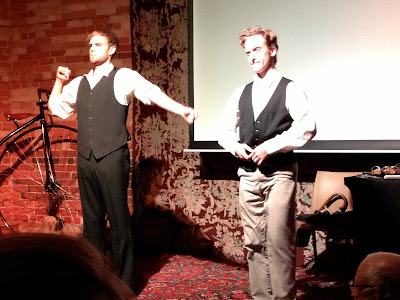 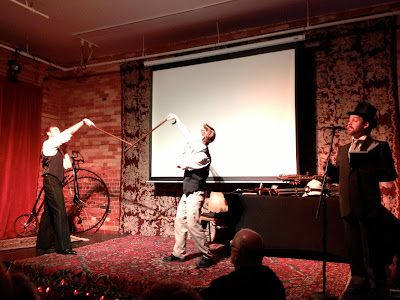 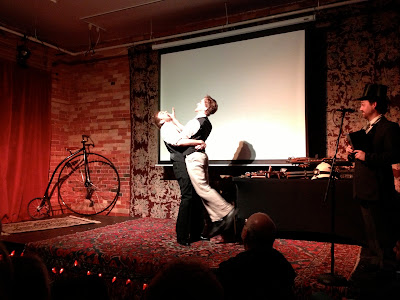