So You Want To Dress Steampunk...

...but you don't have the time nor funds to invest in a complex Steampunk ensemble.

Sometimes we have Steampunk events we must attend, but what happens if we don't have any Steampunk outfits to wear?  Or we'd like to go to the event and participate, but we aren't technically a Steampunker?

Well fear not!  For Adrienne is here to help you create your very own Steampunk outfit from what you already own!  Huzzah!

First of all, for those of you who, like me, are visual people, I will reference some films that might help focus your thoughts.  For Edwardian examples think MOULIN ROUGE, MARRY POPPINS (or most any of those Edwardian 60s Disney musials i.e.: CHITTY CHITTY BANG BANG), MY FAIR LADY and DOWNTON ABBEY.  I actually find the Edwardian slightly easier for people to emulate using contemporary clothing because it is closer in time period to our own.  But for Victorian examples think OLIVER! (any Dickens adaptation), JANE EYRE (so many adaptations), THE IMPORTANCE OF BEING ERNEST (any Wilde adaptation - ie: AN IDEAL HUSBAND), THE AGE OF INNOCENCE, TITANIC and PHANTOM OF THE OPERA.

Second of all, you might notice all my suggestions would also work if you were invited to a neo-Victorian/neo-Edwardian party.  There is nothing particularly Steampunk about the clothing choices.  What makes something steampunk are the accessories.  These are those accessories: 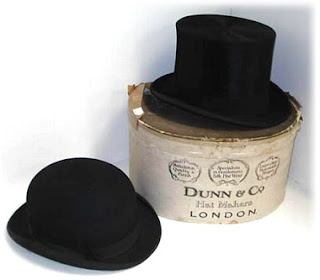 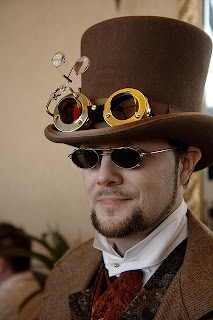 Jewelry: anything really, but in particular: cameos, pocketwatches, chains with a solitary pendant, chokers, rings. 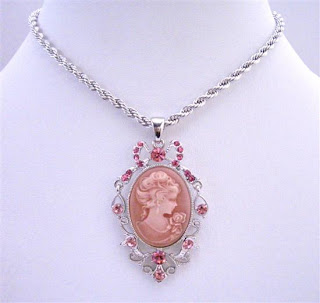 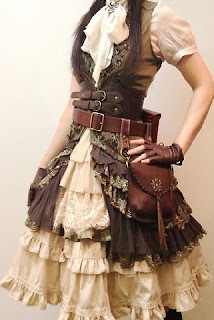 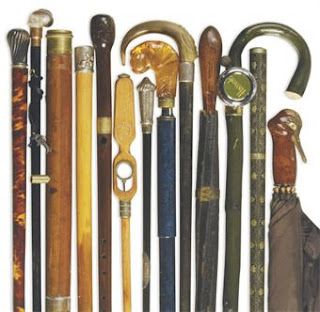 Weapons - all oldy-timey and preferably fake because of the whole going out in public thing.  But: swords, old fashioned guns (small and discrete, large and formidable), daggers. 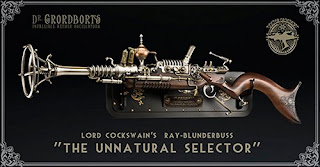 There's an amusing video called "Don't just glue some gears onto it and call it Steampunk" that mocks, well, the obvious.  To which I respond, why the heck not?  If you want to put in a bit of an effort, there is no surer way to Steampunkify your ensemble than gluing some gears onto it.  Here are some inspirational photos. 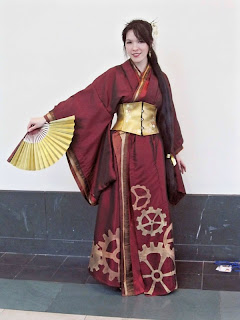 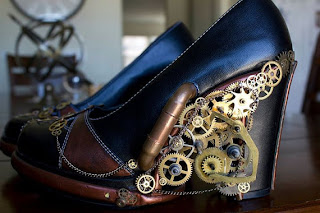 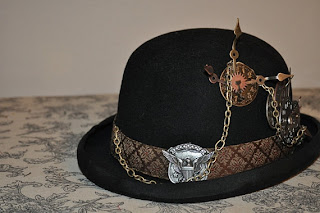 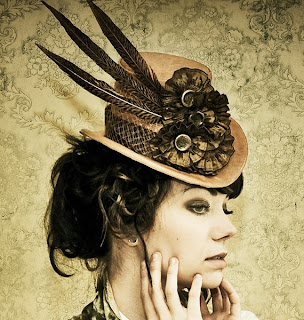 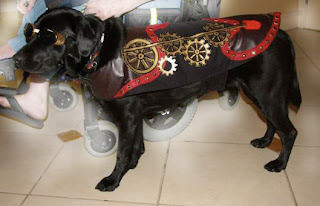 Now for the clothing part.

I really like using Moulin Rouge as my reference, but if people don't know it, I've also included pics.

The easiest for men is a SUIT.  There is a day suit, usually brown, maybe tweed (think what Henry Higgins wears almost all the time throughout MY FAIR LADY), or there is a tux or evening suit - black, sharply put together complete with a top hat. 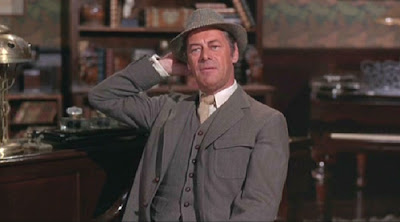 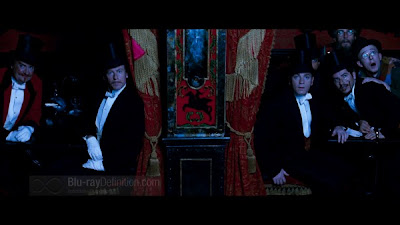 If you have a colourful suit jacket you can suddenly become an MC of your very own Burlesque show :) .  Think Zidler. 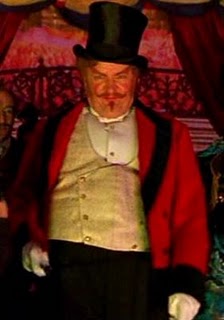 Or if you happen to have a smoking jacket, replace your suit jacket with that, and add a white cravat (where does one get one of those, well it's easy enough with a scarf, but look around your place and see if you have any random bits of fabric, or if you really feel like it, cut up an old bedsheet) and you've got a lovely outfit to rest in for the evening.  And you'll look like The Duke in the Like A Virgin number.


Or add a lab coat and a pair of goggles and suddenly you're a scientist! 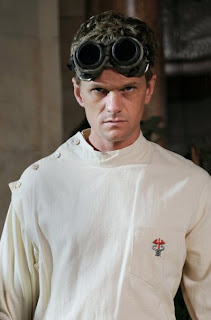 But if a full suit is not in the cards, then there are some other Moulin Rouge inspired looks that work:

The Semi-Dressed Man aka the Roxanne Musical Number - dress pants and shoes, a white tank top/under shirt, if you have them, suspenders add a certain je ne sais quoix (and will really highlight your killer Fosse dance moves).  If you want add a waistcoat/vest.  This look works great for men and women. 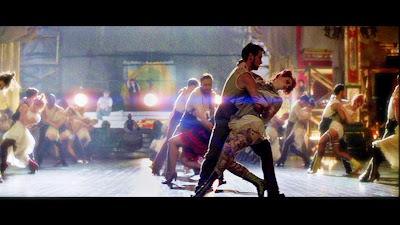 Literally cap it all off with a bowler hat (cheaply found at any costume shop, as are top hats, mine was eight bucks at Theatrics on Yonge here in Toronto) and you're good to go!

The Artist/Inventor aka The Hills Are Alive scene - dress pants and shoes OR brown corduroy/tweed/dress pants and brown boots/shoes, dress shirt (unbuttoned if no tie), scarf/cravat/undone bow tie, vest/waistcoat, funky glasses, most any kind of oldy-timey looking hat 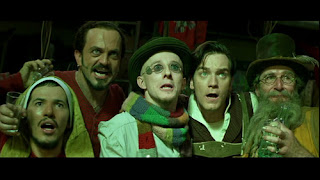 I'm about to launch into female options, but men I suggest you read it too.  There might be something I list for women that could inspire as well.

It's harder for women to come up with a Steampunk costume with the elements in our wardrobes for one simple reason: corsets.  In that we don't tend to own them.  It is one of the coolest costume elements for women getting into the Steampunk aesthetic, but what does the average woman do?

Well first of all it is perfectly acceptable to cross-dress.  Think Marlene Dietrich.  Any of the male suggestions work for women too (to be fair any female suggestions are perfectly fine for men as well if they want), and since a lot of women own suits now, these outfits might suit better than a corseted ensemble. 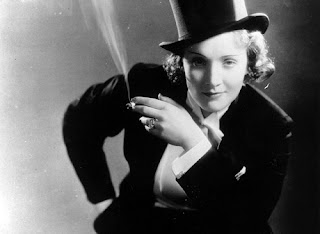 However, here are some uniquely female options:

The Professional/Adventurer - even if you don't have a corset, you can still give the illusion you are wearing one beneath your clothes.  With a cropped military/tweed/business jacket, a tight shirt with a thick belt around the waist and a long skirt, you are good to go.  You can even go with a just below knee length skirt if you don't have a long one.  Think a Wild West kind of look. 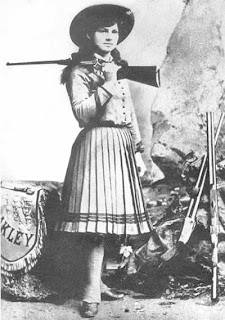 If you add a white lab coat and a pair of goggles suddenly you're a scientist!


The Fortune Teller - mediums, tarot card readers etc were very popular at that time (and I suppose remain so today).  This can be the easiest for women to dress as because most of us own scarves etc that can be wrapped around the head, the waist, the neck.  Get a flowy skirt, a blouse, lots of bling - long necklaces and bangles, hoop earrings . . . bring a deck of cards with you and you're golden.

As you can see from the pic below, fortune teller can also double as pirate. 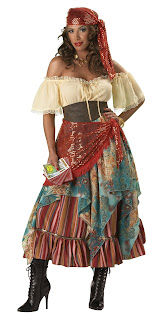 The Dressed-Up Lady - if you have a long elegant gown, preferably at least A-line, add a pair of gloves, a belt, an up-do, some period jewelry and ta-da!  A lovely Edwardian lady.


However, if you DO have a corset:

- add a long skirt and a bolero - you are a dressed up lady
- wear it with the gentlemen options above and you've got a female version of all said outfits
or . . .

The Semi-Dressed Woman - again we're talking about the Roxanne number from Moulin Rouge.  Get a white undershirt, or sleeveless blouse, add the corset on top, a pair of frilly boy shorts underwear, thigh highs, garter belt, shoes.  It's a far more risque costume to the male version, but you can actually be pretty covered while wearing it.  Hair up, messy makeup.  You're good to go!


So there you go!  I could go on, as there are so many wonderful options for dressing up, and my list here is by no means the be all and end all.  But I hope it's sparked some ideas, inspired you in some ways.

However if you want even more inspiration and pics, please visit my other blog post on the Archetypal Steampunk Costumes.

Also if you are in Toronto, here are some excellent stores to check out if you want to spend some cash: Theatrics, Malabars, Kensington Market, Value Village (for Halloween they actually had pre-packaged Steampunk outfits and still might), Goodwill

Reflections Vintage in Toronto is another great place in Toronto if you are looking for quality new and vintage steampunk clothing and accessories at reasonable prices.

They are at 676 Yonge Street. Also on Facebook https://www.facebook.com/groups/ReflectionsVintageToronto/

Thanks really helpful suggestions. Aiming to go to the Steam Punk event at Leicester Space Centre in November

Oh my gosh thank you! I'm MCing a Steampunk themed event this week and am not a steampunker. I had NO IDEA what I was going to wear!

Every single character is looking wonderful in these steampunk costumes.
Specially I love those steampunk goggles.

Hi There, I just spent a little time reading through your posts. Please continue to write more because it’s unusual that someone has something interesting to say about this. Will be waiting for more!