And we come to the end.

And now it's over. This is my last night on the island, so it is time for reflection. . .


First the remaining schools need to be named:

The views from the schools on the island are far nicer than the ones in Toronto. I'm sorry to say it, but it's true: 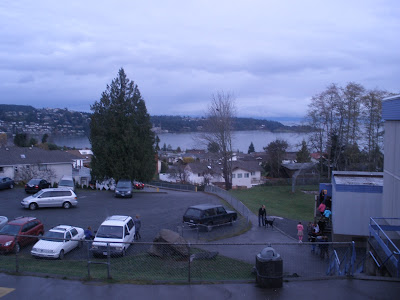 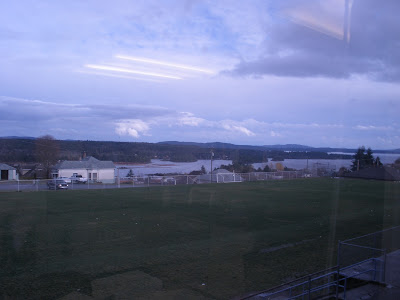 The kids, as ever, as always, are totally awesome. In fact this whole trip would have been far far less entertaining without them. Doing the same presentation so many times becomes truly a mind over matter situation, but when you are doing it for different kids who are all at the same time totally enthusiastic, it makes it all so worthwhile.


Lee Losell rocks. Lee organised the entire trip, made sure I had a nice comfy place to sleep, and drove me everywhere. In the rain. And over the Malahat. The man knows no fear. And his daughter is beyond adorable. Thank you so much for everything Lee! Here's a blurry picture of us, and no I'm not that short, he's just 6'5": 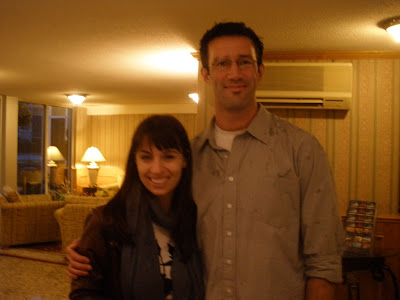 When the fire alarm goes off in your hotel at 1am you really do have to get up and go downstairs.


When you are on the island and the mother of the lovely Lesley Livingston is also on said island, it is important to meet for drinks. Thank you for coming all the way out in the rain Margo!


I owe Doug and Lynn Scott another thank you for loaning me their camera since I stupidly forgot mine at home. Thank you!


Though it's not like I am particularly physical doing my presentation, my body has totally broken down. My knee is now killing me, and my back, and my head. I don't know how teachers stand on their feet for so many hours a day. I bow down to you.


And the trees here are still very tall.

In all it was a truly lovely time, though very very mentally and physically exhausting. I am thrilled I got to do it, but I have to be honest, I'm glad it is over too. Not sure if I'll be able to do something like this again in the near future. Thank you to everyone on the island who has been so lovely and kind and supportive. You've made the experience that much more special. Thanks too of course to TD and The Canadian Children's Book Centre for having this book week in the first place.


And that's all for now. Will resume regular blogging next week.

Until then, enjoy the following pictures of trees: 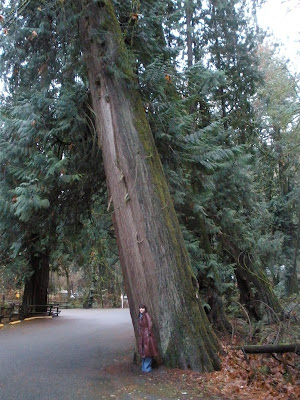 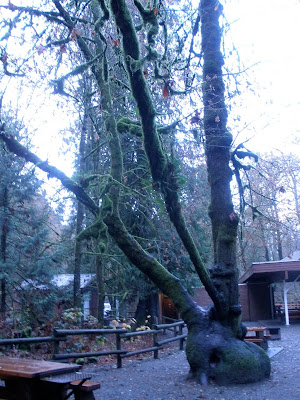 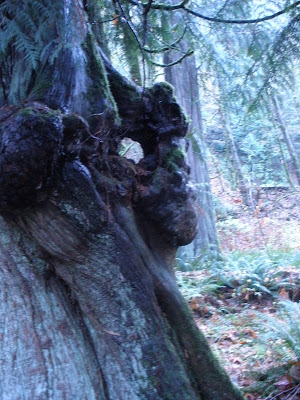 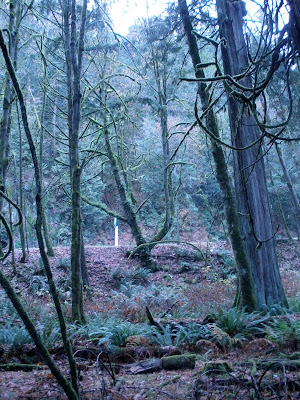 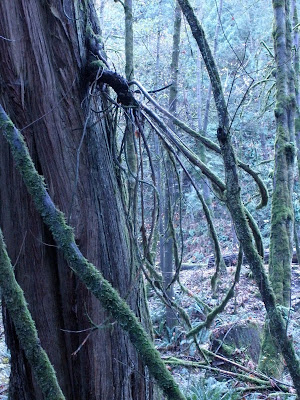 Thoughts at the close of day 3

1. Vancouver Island is twisty. Every few metres a road curves, bends, winds, what you will. I love it, but am glad I'm not doing the driving especially not in the . . .

2. Rain. Typical and yet I am told a-typical. It rains on the West Coast but evidently not like this and not this consistently. . .

3. Which makes it tough when the sun does come out and is reflected in the road, practically blinding you.

4. The trees here are super tall.

5. The people are super nice.

6. No one seems offended that I'm from Toronto and yet I'm a little paranoid confessing I am.

7. Kids are awesome here, but kids tend to be awesome most everywhere.

8. My joke about the French cover for "Alex" is the only one that works consistently for any age group.

9. This is a truly exhausting experience.

10. I am so thrilled that I have had this opportunity.

So I've been on the island actually technically for three days, but really my tour of schools etc began yesterday.

Sunday was quite something, getting up at 4:45am to catch a 7am flight for Vancouver, then connecting flight to Victoria. Watched The Taking of Pelham 123 and Julie/Julia (which I'd already seen). Pelham 123 was actually quite a lot of fun, John Travolta was ridiculous.

Got into Victoria, got to the hotel, and slept for a few hours, before getting up to go for a walk around downtown. Not sure if you've ever been, but the place is beautiful, even in this rainy cold weather. Stopped into Munro's bookshop, signed some books and chatted with one of the employees there, Ellen. Was great, and the bookshop is GORGEOUS: 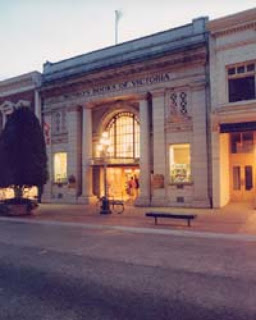 On the way to meet with my friends Doug and Lynn Scott, I passed Darth Vader playing the violin on the street. Just fyi.

Had dinner with Doug and Lynn (SUCH good food, omg) and another friend of theirs, and then was back to the hotel to SLEEP.

Monday was the start of the tour. 3 school groups and one evening talk:

Let me tell you guys, the kids on Vancouver Island are AWESOME. Enthusiastic, kind of nutty (like me!) and very smart. It's been crazy fun, and today was no different.

Oh, and also I've been provided several lunches, and I think the residents of Vancouver Island must take a mandatory sandwich making class in school, because I've never had such good sandwiches. Odd to say, but the truth.

Went back to Cordova Bay Elementary today after going to Torquay elementary (both awesome again). And then I ferried over to Salt Spring Island which is absolutely gorgeous. Spoke at a school there, to a group of just 29 but with the enthusiasm of three times as many. Signed paper. Signed journals. Signed bags and shoes. Arms and faces. I'm so sorry parental units, they made me!

And now I am in Nanaimo, getting the evening off.

Couple of points. Really having a lovely time with the guy who organised the whole trip and who is also my lovely chauffeur - Lee. He is a former forest fire firefighter turned librarian, which I think is awesome and I think you may find someday a character in one of my books with a similar story . . . Poor guy's had to sit through the same presentation many many times over now, but he does it with a smile. Also it's been raining almost non-stop since I've been here. I don't really mind, but everyone here keeps apologising to me for it. I've tried to explain to them that I'm the variable, that if anything, I ought to be the one saying I'm sorry. But they refuse to hear it.

People on this island are just way too nice.

I've also been canvassing for votes for the Red Cedar award, for which "Alex and the Ironic Gentleman" has been nominated. The Red Cedar is voted on by kids in BC (so cool), and I've got some serious competition - Jean Little, Gordon Korman etc. So I need to take advantage of this situation. And I mean, come on! Those other authors have already won like tons of awards, so I think it's only fair that it's my turn! So kids of BC . . . we can do it! Yes we can!

And that's it for now! Here are some pics of Salt Spring Island for your enjoyment! 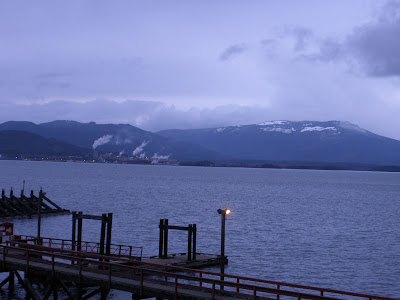 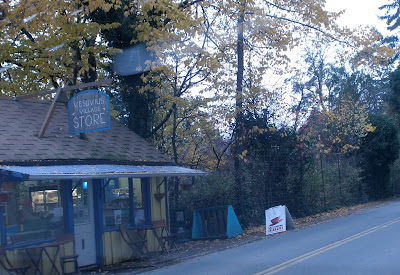 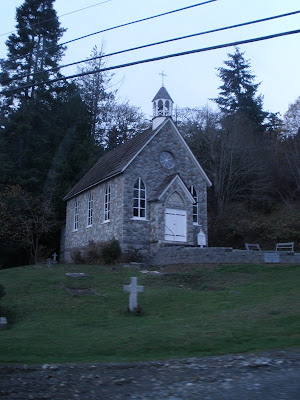 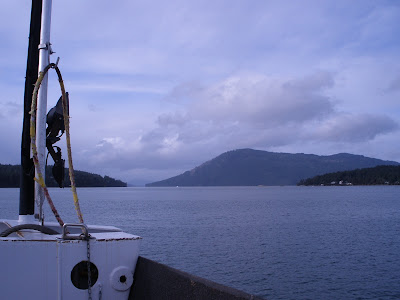 It's been so long!

It's been a long hiatus. Like seriously long. I don't think I've ever been away from you guys for so long. I've really actually missed you guys! I know I took time off because I really really needed it, but still, I wound up quite missing the old blogging community and I am happy to say that I am back.


I am here today to announce that tomorrow I will be jetting off to Vancouver Island to take part in the TD Canadian Children's Book Week Tour. I'll be spending the week doing readings and talks around the Island and I am really excited! Maybe a little terrified, but mostly super excited!


There are a couple events open to the public, if you are in the area and keen to attend:


If you can't make it to the island this week, have no fear I will be blogging about it, so do stay tuned!

Lastly, here is a picture of me with my very fabulous Heart of Hawick Children's Book Award (all the way from the UK)! Thanks again to all the kids who voted for "Alex", you totally rock! 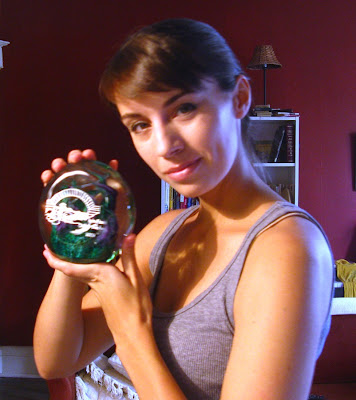 And now I'm off, but not for long. Feels too good to be back! Thanks for your patience everyone, I really really appreciate it.
Posted by Adrienne at 4:48 PM 3 comments: