Steampunk Tuesday - The Next Big Thing? 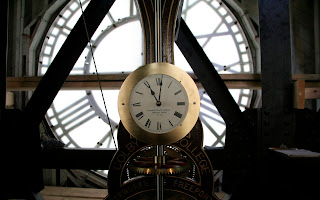 The UK version of the Huffington Post has an interesting article today about Steampunk and whether it's going to become the next big trend.  To quote:

"The look is also starting to influence street fashion. Steampunk clothing typically adds the 'best' looks of the Victorian era - explorers, soldiers, countesses, lords and prostitutes - to today's most relevant street styles: goth, burlesque, the fetishism of the Suicide Girls, the lace and leather of pirates, and the frills and capes of vampires. A few SP elements have already been seen in Top Shop, from spiked clothes to jewellery. Some say it's the inspiration behind the current vogue for men wearing rolled up trousers with loud - or no - socks. The trend also influenced this season's high fashion trends for fetish, glamour and dressing up.

Meanwhile, TV series like the BBC's latest Sherlock Holmes adaptation and US thriller Warehouse 13 owe a debt to steampunk style in their mixing of the 19th and 21st Centuries, as do the later Harry Potter films. There are SP video games, like the highly acclaimed Bioshock, featuring an undersea world of diving bells and crinolined orphan girls. As SP has grown, so too has the service industry around it. So you can now have SP weddings, with mechanical cakes. The trend has even given rise to its own vocabulary in which, for instance, people don't arrive, they "dock" (as in from an airship)."

Is Steampunk about to explode onto the scene?

I think . . . quite possibly.  I have definitely seen an influence on the fashion world.  My latest Steampunk outfit was purchased almost in its entirety at FOREVER 21 (including accessories).  And as the article points out, there are more movies and games than ever that have its flavour.  And while I still tend to have to explain what Steampunk is before I can explain what my new book is about, I am definitely finding more people are answering "yes" to the question, "Do you know what Steampunk is?"

And I think that is the best way of testing when Steampunk hits trend level.  The second the majority of people answer yes to that question, then we know we've hit the big time.

But until we do, and if/when we do, I ask all Steampunkers the following favour:  let's not judge.  Let's not be like the hipsters who pride themselves in getting there first with, you know, everything.  Where something becomes uncool the second the layman knows about it.  That's not what Steampunk is about.  Steampunk is about Steampunk, not about an image.  It is the ultimate Rorschach test and can be interpreted to be whatever the individual wants it to be.

For the most part Steampunkers are super supportive of each other, but I know that I personally have encountered people who have told me my costume needed work etc.  And you know what?  That made me sad, because I liked my costume (still do).  I was proud that I put it together, and thought I looked good in it.  It might not be what that particular individual considered Steampunk enough, but we all have our own particular way into the genre.  Mine isn't even through costuming in the first place, it's through writing.  Let's support our attempts, because making the attempt in the first place is what matters most.

So let's not judge, but be welcoming and open.  And let's not judge if Steampunk becomes a trend: "Oh that person is only dressing like that because they bought that skirt at Top Shop."  Let's be happy to see others having fun with Steampunk, even if for them it is a fleeting thing.  Steampunk, ultimately, is about having fun.  Playing.  Let's not lose sight of that.

I certainly hope it's the next "big thing". I've got a Steampunk WIP that I really love.

(And I owe it to AW's Steampunk'd April Fool's this year. I'd never even considered writing in the genre before that, but it got under my skin and wouldn't leave.)

"About to explode?" I think that bomb went off a while ago. Steampunk is everywhere!

TB - yes "about to explode". If you are aware of Steampunk you are aware that it seems to be everywhere, but most laymen I speak with I still have to explain what Steampunk is to them. It is certainly more popular than it once was, and there are even ready made Steampunk Halloween costumes out there, but I still maintain that it isn't quite in the common vernacular. Not yet. When it becomes as easy to understand a term as say "goth" etc, then it will have hit the mainstream.

The problem with us folk in the SF/Fantasy community is that we are aware of the trends within our own community. These trends however tend to trend at different times to the rest of the world. In the SF/Fantasy world Steampunk is almost passe. But it's just starting to hit its stride in the outside world.

All my own opinion, but it comes from a fair bit of studious observation.

I think it's already exploded, people are just now starting to notice the shrapnel everywhere. But it's friggin' cool shrapnel, right?!