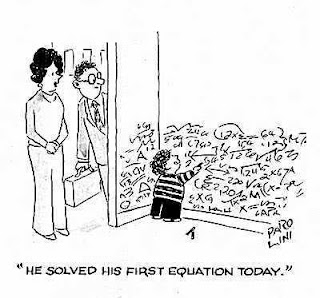 I often get asked what inspires me to write.  Where I get my ideas.  And it’s a reasonable question, one that often I can only answer with, “I don’t know” and “I write about stuff I like”.  Not very satisfying answers to be sure.

Being creative is this strange beast.  Being inspired even more so.

But here's the thing.

Writing can, yes, at times seem almost mystical, and sometimes in those rare bouts of inspiration there can be a moment where you as the author are very, “Woah, how did that happen?”  But nine times out of ten?  Writing is deeply practical.

It’s all about problem solving:  “Okay, so this character needs to get to there, but he’s over here.  Do I write out his entire journey Lord of the Rings style, or instead say something like – 'Three days later . . .'?” or “Shoot, I already used a flock of birds metaphor, I guess I can’t use this one . . .”  or “Anyone know another word for “salacious”?”

And this is something that has always fascinated me about the writing process, that something that can be such a creative and personal experience can also be so pragmatic.

We have an image of an author struggling over just the right words to express just the right thought.  And yes, authors do struggle over that.  But more often than not they are simply reading a paragraph back and realizing: “Shoot, I used the word “quite” three times here.  I guess I need to replace two of them.”  It’s not because of how “quite” affects the artistic integrity of the work.  It’s because it sounds stupid to repeat the same word so many times in one paragraph.  Or maybe the author reads a section of her book and realizes the jump from one paragraph to the next is a little jarring.  So she adds a “but” or a “though” or a “so”, and with one word, she's made the jump seem seamless.

Writing, editing, putting a novel together?  I compare it to math.  And I am quite fond of math.  I love how you have to rearrange the numbers, add this, subtract that, multiply another thing, and if you do it all in the right order, you come out with the answer.  It’s such a sense of accomplishment.  And smug satisfaction.

And writing works an awful lot like that too.

Take yesterday, for example. I went to a fellow author friend’s place and we edited together.  We wound up spending around an hour trying to solve a plot point in her manuscript.  The solution:  subtract one of the major characters out of the story and suddenly everything fit together.  Once we figured that out, we both felt energized, and I know she felt a huge weight lift off her shoulders, a weight she’d been carrying around all week.

Here's another more detailed example, courtesy of the edits I am currently doing for THE FRIDAY SOCIETY:

My editor pointed out that one chapter I’d written had Character A doing something that seemed like it would make much more sense for Character B to do.  After reading over the chapter a few times, I realised she was right.  So.  What to do?

This is what I did:

I cut the chapter and pasted it into a new file so I had it easy to access.  I decided I would put the scene into the next chapter where both Character A and Character B were together.  The good news was I could keep much of the middle bit of the original chapter.  The bad news, I had to change the beginning and end so that the task made sense within the new chapter.

I also had to change the perspective.  It had originally been Character A’s, and now it was Character B’s, and they are different people who react to things differently.

So I spent a lot of time copying sentences and paragraphs from the original chapter and pasting them into the Character B chapter in the appropriate spots.  And at the same time I also had to write new bits so that it all made sense.

Eventually though, I managed to knit both scenes together.

But that wasn’t the end of it.

I had to go back a chapter and find a scene that I could move between the two Character B chapters.  It had to take place in the right part of the story so as not to mess up the timeline, and it had to be a scene that could stand on its own without that which went before it.

And I managed to find such a scene.  It was a scene that involved Character C.

I then moved it between the two Character B chapters, and ta-da!  My math problem was solved, and indeed I think the book was stronger for it.

Of course, then I had to re-number all the chapters, which is quite literal math.

So you see, sometimes it isn’t about taking long walks seeking out inspiration, or agonizing over sentences and the perfect description of the setting sun.  Sometimes it’s just about problem solving.  And copy and paste.

Seriously, where would we be without the copy and paste feature?
Posted by Adrienne at 12:06 PM

"something that can be such a creative and personal experience can also be so pragmatic."
This is so true and well said. While writing is something that is hard to define, I think people often forget that it requires a lot of discipline and practicality. Great post!

I have found what you say to be true, and still mystical. I have been trying to streamline POVs in a historical novel I just finished and realized that a character that invented himself as the story progressed kept stealing all the lines, as if they were his thoughts and words all along.

When you start writing a novel, do you create biographies for each character? With the intent of helping you keep them straight and understand their thoughts/reasoning/actions? If not, how do you keep these things straight?