One of the sincere pleasures I had last year was attending the first ever Canadian National Steampunk Exhibition.  At that wonderful event, I met many fabulous people.  But the highlight of the weekend had to be meeting Professor Elemental and seeing him perform.  Here we are photographed together with my fellow author J.M. Frey. 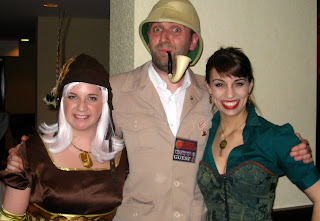 For those of you unaware of the most talented Professor Elemental, here's a brief bio:


"Professor Elemental is a steampunk mad professor. His hobbies include adventure, invention, and a good cuppa. Aside from a few of his experiments (best left unmentioned), the Professor first got himself noticed with the track Cup of Brown Joy. The video has notched up over a million views on YouTube. 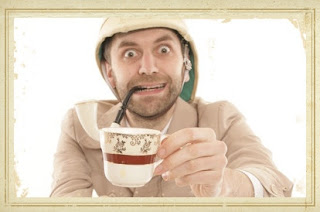 He takes to the stage and engages the audience at any kind of show – from festivals to fetish nights – and he also loves to work with people on special, bespoke events such as weddings. He's happy to host cabaret or perform solo. Recent events have included The Bizarre Ball, Secret Garden Festival, and the Steampunk World’s Fair."

I am most thrilled to announce to you all that the good Professor agreed to be interviewed by yours truly, and the following is the result.  Enjoy!

Professor, you are a true renaissance man.  Not only a skilled performer and musician, but also an adventurer, scientist, and boiled dead leaves enthusiast.  Where on earth did you acquire so many skills, and why do you think you are so talented?

I think it’s something in the water. Namely a cocktail of mind altering drugs that my father used to sprinkle randomly into our daily cordial. He delighted in seeing which of us might become geniuses or go quite quite mad. So far as I know, I’m the only one who escaped madness- I am not sure about my brothers and sisters, or indeed if I didn’t imagine having them in the first place. I have a photographic memory, but it is a shaky, amateur photography at best.

What made you think, “Hip Hop, well now wouldn’t that be just delightful?”?

It was the only choice available to me. I love hip hop, more than almost anything, it feeds my every waking moment. Plus, it involved a great deal of words and talking and I’m a great fan of both.

What are your musical influences?

Hrmm, Bonzo dog doo dah band, Dizraeli and the small gods, Isaac Hayes, Walter Snicket and the army of broken toys, Tom Caruana, Jon Clark and every single piece of rap music that came out in the 90s. 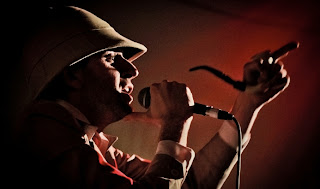 How do you see your music evolving in the years to come?
I am pushing in some very strange and beautiful directions over the next couple of years- collaborations and solo shows, shows in strange fictional places and songs about things that no one has ever done songs about before.

What is your favourite part about performing?

Peoples. I love meeting people afterwards and having a party with whoever has been watching. That has always been my favourite bit- I’ve never been very good at doing and show and leaving straight afterwards.

I also enjoy being able to ask a crowd to do my bidding- it is amazing what people will do if you ask politely.

There’s many that I really can’t share as this might be read by children or the infirm. Well, in the last 6 months, I have been upstaged  by America’s best gorilla, spanked heartily at a fetish night and ridden a bicycle powered roundabout through San Francisco- my aim is for something unique to happen at every show, and my record is pretty good thus far.

The worst show for me was still the ‘Shoreham by sea food festival’ a few years back however, where I played for free to three old ladies in the rain. (One of whom stopped me mid-verse and asked me to turn up the beats as the vocals were annoying her.)

What part of the world have you enjoyed exploring (either fictional or real or both) the most, and what part would you like to still visit?

I am aiming to do a tour of purely fictional venues before the end of 2012. I have popped into a Conan the barbarian comic (Dark horse comics, issue 12) and am appearing in a few role playing games which is a nice start. I’d like to work my way up to a live concert at the town hall in Oz or at the Queen of hearts royal garden party- but it’s still a way off…

You are now being honoured with a comic book about you, could you tell us a little bit how this came to be and what it will be about?  Were you concerned they’d get anything wrong about you?  What did they get oh so right?

Well, when your face is as handsome as mine, it is of course very difficult to capture it accurately. Even looking directly at it can make one go blind, so all of the artists had to wear special protective goggles when they were sketching me.

To be honest, they have done a fantastic job overall- the adventures are accurate and exciting. And so many secrets are revealed: just what did happen on that arctic expedition, how did I meet Geoffrey and why on earth do I have so many giant robot bees around the house.

Now that you are being immortalised in ink, are there any other goals out there for you, Professor?

YES. We are filming a TV pilot later this year- a sort of cross between Sherlock Holmes, Flight of the Concords and some other things that I don’t really have a frame of reference for. It will be amazing.

Plus there is plenty of new music on the way; you can find it all at www.professorelemental.com

Oh the badgermingo definitely. Lovely plumage and can wrestle a dog to the death. 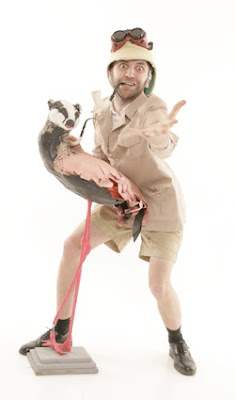 What is your favourite Steampunk accessory?

My goggles, they allow me to see backwards and also the colour of peoples souls, which can be a great party trick.

And there you go!  Thanks so much for joining us!

Thanks so much for having me. Battenburg?

Video for "Cup of Brown Joy" :