I have a new agent!

I am finally able to share some news with everyone that is both good and bad. But ultimately good.

I have a new agent.

But, Adrienne, how can this be? The way you have spoken about the Darley Anderson Literary Agency and your agents, first Julia, then Becky, would suggest you all rather got along.

Ah, Adrienne, you are so right. But the publishing industry is a strange beast, and things can, for want of a better word . . . change.

In this case my agent Becky decided to move on to a new job at Random House UK (with which we must all wish her the best of luck). Such was the situation that the head of the agency, Darley, who was unsure when exactly they would replace her, did not want me to sit languishing as they went about the very difficult task of finding someone new.

It made sense. One of those "sad but true" kind of situations. So we parted ways. I will admit to being a little tearful at the time. After all there are very few people you can say actually changed your life, but the amazing people at the Darley Anderson Agency did. Before them I was an actress and a temp. After them . . . I was a writer. A path I had never ever intended to take was taken, and my life went on an unbelievable adventure that I could never have anticipated.

So to everyone at the Darley Anderson Literary Agency. Thank you. Thank you so much.

That is the sad news.

I am happy to say that I have signed with Jessica Regel at the Jean V Naggar Agency in New York!

I am very happy to say this, because in the few short weeks we've been working together, I've had edits on two novels of mine, one is currently out on submission, and I have a great deal of hope for the second. I feel very supported and truly lucky to be able to work with such an awesome gal.

If the name sounds familiar, it should. She also represents my good friend Lesley, whom I've mentioned on this blog possibly once or twice. I also actually blogged about meeting her three years ago when Lesley and I went to NY for BEA. Lesley was meeting her agent in person for the first time, and said agent was lovely enough to invite me along to their breakfast meeting. This is what I said about the experience at the time:

Lesley and I meet up at the Parker Meridian to meet with her agent Jessica for lunch at Norma's. Norma's is AWESOME! All breakfast food, but really, you know, good breakfast food. They served us a shot of tropical frozen smoothie, and the best tasting orange juice ever. I had eggs Benedict with smoked salmon, mmmm tasty. And we chatted about writing and publishing and Jessica talked about how much she adored Lesley (and really what's not to adore) and it was just delightful.

This is the picture we took. Left to right - me, Lesley, Jessica 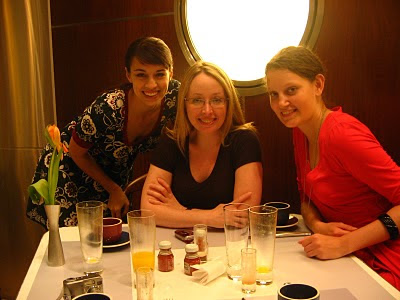 For your interest, since I have talked in the past about Getting An Agent and the steps one takes, I should point out that this time was a little different than back when I was an unpublished author who didn't know anyone in or really anything about the industry. In this case, because I knew Jessica, I asked Lesley if she wouldn't mind giving her a call and seeing if she would be interested in getting a query from me. I was fortunate enough that her response was not only yes, but that she'd always been really enthusiastic about my work and was keenly interested in the possibility of representing me.

I sent her less of a query, and more a straightforward email explaining the situation (what had happened with Darley etc) along with a copy of my latest manuscript.

Two days later (this girl is fast), she had sent it back with edits and an offer.

I was utterly over the moon. I went from the fear of having no agent after so many years, to the joy of having a brand new one in a very short but stressful few days.

I want to now take a brief moment to analyse what happened. As you know, I like to take everything I've learned and share it with you guys. And this whole situation taught me a pretty big lesson. It is important to remember how much things can change in this industry, and how when they do, not to give up hope. It's also important to remember that you never know where someone might wind up and it's probably best not to burn any bridges (I'm so glad, for example, I kept all my horrible opinions about Jessica to myself . . . I kid I kid . . . there's really nothing bad to say about this girl, which is a bit annoying really). Nothing is certain, even when you are a published author. Editors can change houses (I've had this happen to me twice), agents can leave you (again, twice). The one thing you can control is your work and your reputation.

To use me as an example: I already had a good reputation with Jessica. But here's the kicker. . .

I had a manuscript that I was getting rejections for last year. A lot of rejections (I've hinted at this in other posts). I was truly upset about it. But finally I decided I would write something else, something I considered far more commercial. I did. I wrote it in two and a half months which is the fastest I have ever written anything ever, and I still can't believe I did it.

And it was because I now had this commercial manuscript, a manuscript that had yet to be sent out to any publishers, that I was a viable prospect for Jessica. Had I not written this book and had I parted ways with my agency . . . I don't know if I would have received representation as quickly.

So you see: reputation and work.

It's so important to keep that in the back of your mind. Trust me, I don't always do so myself, and having just experienced what I have has really sent this message home for me.

As ever, let us all remember to be professional and thoughtful in this business. I've said it a million times, but it really matters a lot. It's so easy to vent on Twitter, on blogs, etc. It is so easy to wallow that our manuscript isn't selling. But often the most dangerous things are those that are easy.


Anyway, enough lesson learning. This is meant to be a joyful post, though bitter sweet. It's also an interesting way to start the decade. Feels like a new beginning. A new part of the adventure begins.

And as is pretty evident from my books, I do love me my adventures :) .
Posted by Adrienne at 4:50 PM

Congratulations on getting the shiny new agent. Good luck with both of your new manuscripts, always good fun.

Great post. I've thought a lot about the different ways one might get in contact with an agent, other than cold-querying them. I've since built my own website and have tried to promote my work locally and through social networks. I'm hoping that one day the right person takes a look and refers me to an agent. We'll see!

Wow! I'm impressed with the grace that you seem to have handled this situation. It's so true that too many people bad-mouth others without thinking of what may lie down the road.

Congratulations on the new agent! I wish you much luck with finding a home for your Ms's ;o)

Congratulations! and best of luck with the new manuscripts.
I had a similar experience- great agent, left the business to become a freelance editor--but that eventually led me to my new fabulous agent and a new deal with Scholastic.
It's hard to remember when it's all coming crashing down around you but one thing leads to another which leads to another..... All we can as writers is keep working.

What an excellent story! Thanks so much for sharing this inspiration. I can't imagine what it would be like to suddenly be without an agent. Agenting is like marriage; if you're lucky, you only have to do it once!

Congratulations. It is great that you didn't have to part with your agent due to any negative issues.

Congratulations, Adrienne. And your insights about this business are so dead on... We always need to keep working and adapting. Rug always getting tugged out from under authors. Nature of the business. Sigh.

Best of luck with your new agent, and especially your SUB! As someone who has changed agents twice (now with my third), always leaving on good terms, I can only second your advice heartily. Don't burn any bridges, act with grace and good will always. Agents work themselves silly on our behalves, and whether they simply changed jobs as yours did, or ultimately cannot sell a project, it's important to be thankful and pleasant. You never know what (or who) is around the next corner.

Congratulations! I'm a newcomer to your blog, but love your honesty and insight into the business. Look forward to hearing more about this commercial project, and how it turns into a new publishing deal with your new agent.

Thanks everyone so much for your support, and as ever the truly lovely compliments about my blog. They means as much to me as any compliments on my writing in general.

D.A - Yes, I suppose there are many different paths to getting an agent, but don't turn up your nose at cold querying altogether. I might have got this agent through connections, but that first lovely agent? The one that sold both my books all around the world, who were awesome to work with, supportive, and one of the top agencies in the UK? That came from a good old fashioned cold query. I knew NO ONE when I started out and it worked out just fine. All my author friends got their agents this same way. It can happen, and does happen all the time.