So this Saturday I had the distinct honour of attending Quaker Road School's Production of "Alex and the Ironic Gentleman". Truly I got the star treatment, with reserved front row seats, flowers, and the distinct feeling I was being watched from behind the curtains on stage.

The show was written by the awesome JM Frey and directed by Stephanie Lalonde, and starred, of course, the kids from Quaker Road school. It was AWESOME!!

Aside from the performances which were fantastic and hilarious, I also found it fascinating to watch an interpretation of my work. Frey and Lalonde weren't concerned with being too literal with the book (something which bugs me about many an adaptation, I loved the liberties Jackson took with Lord of the Rings but personally found the Narnia films quite boring in their very straight from page to screen adaptation), and while they kept the essential story and structure in tact, it was great fun to see the changes they made to turn 300 some pages into a 45 minute play. Some of the new stuff they added was just hilarious, and very much in the same tone as my original writing which was pretty cool.

The kids did a great job getting into character, and really seemed to be loving every second. And quite frankly I think I enjoyed the set changes almost as much as the action on stage.

Warning - there are a few spoilers in the following pictures. I'm serious, if you haven't read the book yet and want to, you might want to stop reading my post here: 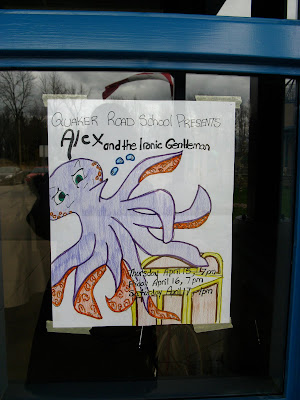 The poster for the show. 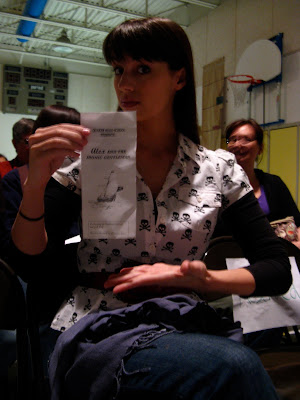 Me in my front row seat holding my copy of the program. 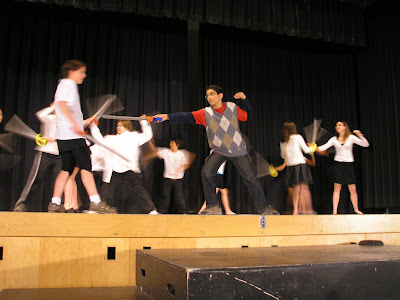 Fencing class sequence, where Mr. Underwood (in the argyle vest centre) teaches Alex how to become a pro. 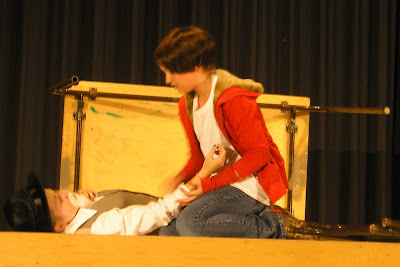 The saddest scene in the book probably, and definitely on stage as well (made all the more so with the sad swelling music). The untimely demise of Alex's Uncle. 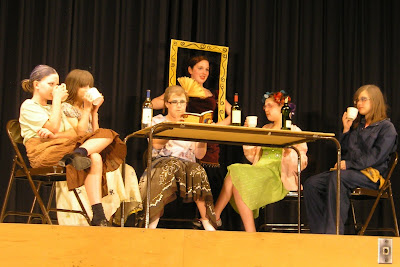 The dastardly Daughters of the Founding Fathers' Preservation Society (sitting in front of the portrait of Mrs. Steele). 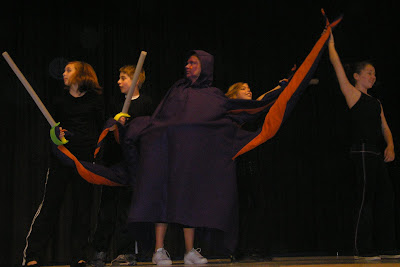 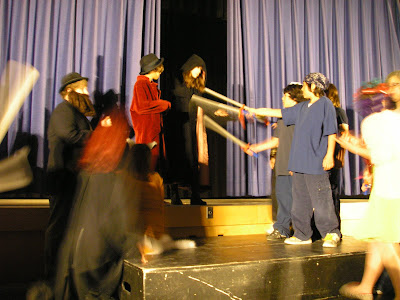 The play comes to its exciting climax!

And now the cast and crew. I kinda sorta made them all take a million pictures with me. The parents all took advantage of the situation as well, so we felt very much like celebrities with the paparazzi going crazy before us. I am telling you all this by way of explaining why we might not all be looking in the same direction in the pictures, and also looking a bit confused: 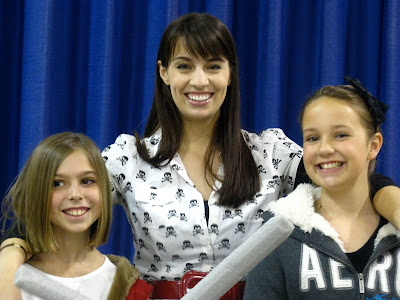 Me and the Alexes (they switched up playing the part every other show). 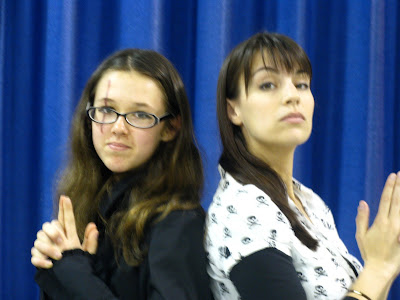 Me and Captain Steele. 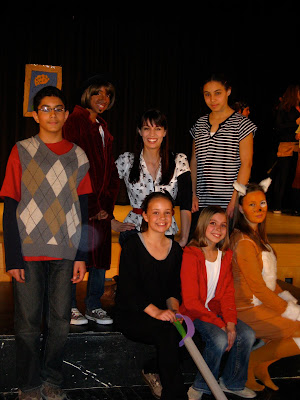 Mr. Underwood, Coriander the Conjurer, Me, Alex's Uncle (though dressed as a sailor), two Alexes and Giggles. 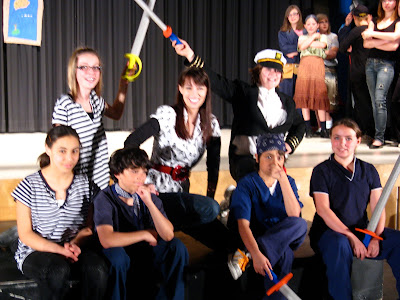 The crew of the HMS Valiant. Look how noble we are. 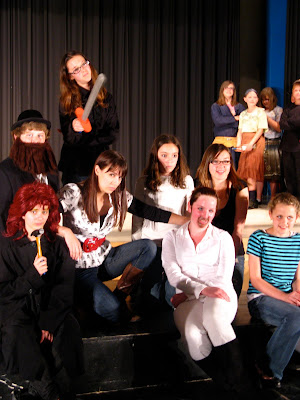 The crew of the Ironic Gentleman. Look how evil we are. 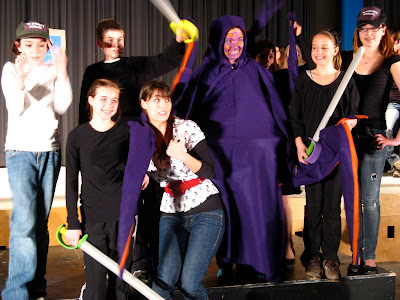 Me a little concerned hanging out with the Extremely Ginormous Octopus and the film crew of "The Emperor and the Necklace". 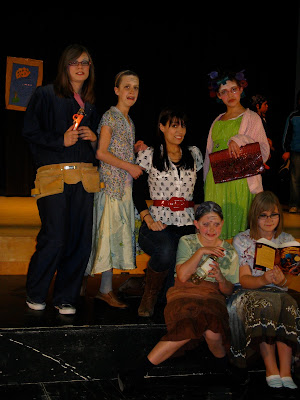 Me even more concerned to be hanging out with the Daughters of the Founding Fathers' Preservation Society. 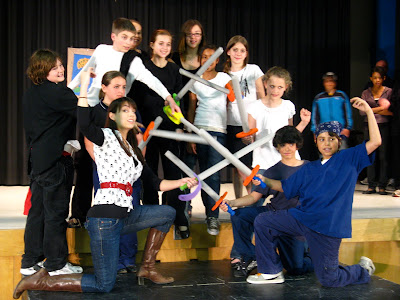 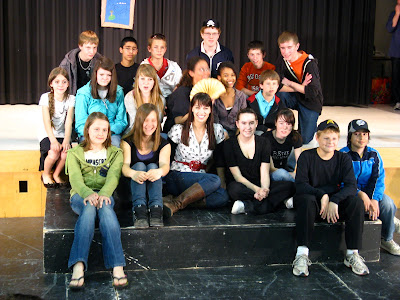 Me and the amazing tech crew. Having been a techie myself, I appreciate just how awesome these folk are. 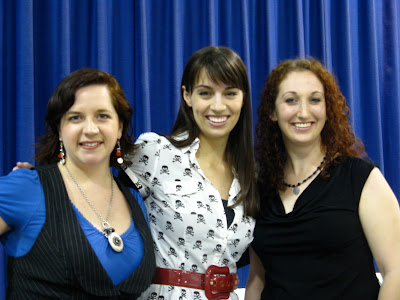 JM Frey, Me and Stephanie Lalonde. 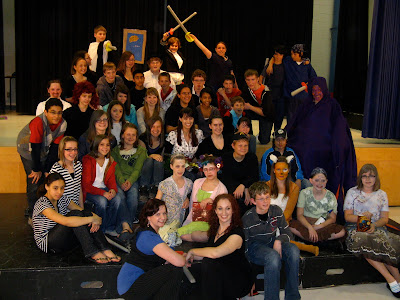 The entire cast and crew. 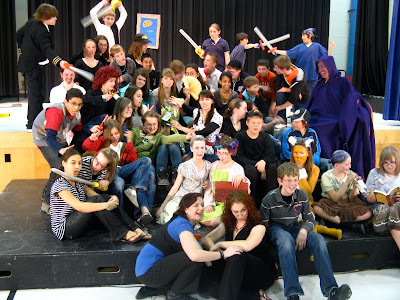 And the entire cast and crew acting entirely ridiculous.

FYI - I'm going to be in Ottawa this week for the MASC Young Authors Conference. As part of the event I'll be doing a public reading at the Alta Vista Branch of the Ottawa Public Library system on Tuesday April 20th (tomorrow), at 1:45pm for those of you who might be interested and in the vicinity.
Posted by Adrienne at 10:33 AM

just as cool as them making a play based on your book is the fact that you took the time to go see it. I am sure they will never forget it.

A play based on ALEX -- how brilliant is that?! I love your pirate blouse, too. Sounds like a wonderful evening of fun, and congratulations on having inspired these teachers and students so much with your zany and delightful imagination!

Love the pics! That must have been so fun for you. :)

BTW, love the top you wore!

Oh wow. How awesome! aww! It mustve been a great feeling to see your work come to life :)

How awesome. That is simply too cute. So fun for you--and for them!

Oh wow! That is totaly cool. I bet the kids and you where thrilled ^_^

Ran over here last week while reading this book - but had to come back today to tell you how much I enjoyed it... incredibly awesome that they made a play of it, I'm sure those little actors and actresses will remember it always!

Just posted a review on my book blog (www.whatallthekidsarereading.blogspot.com) feel free to drop by to see the nice things I had to say (phew, glad I liked it, or I wouldn't have been able to invite you!)

To see people spending too much just fulfill the passion is very amazing. Very encouraging attitude :)